Amanuesis Monday is a daily blogging prompt from geneabloggerstribe.com which encourages the family historian to transcribe family letters, journals, audiotapes, and other historical artifacts. Amanuensis Monday is a popular ongoing series created by John Newmark at Transylvania Dutch. 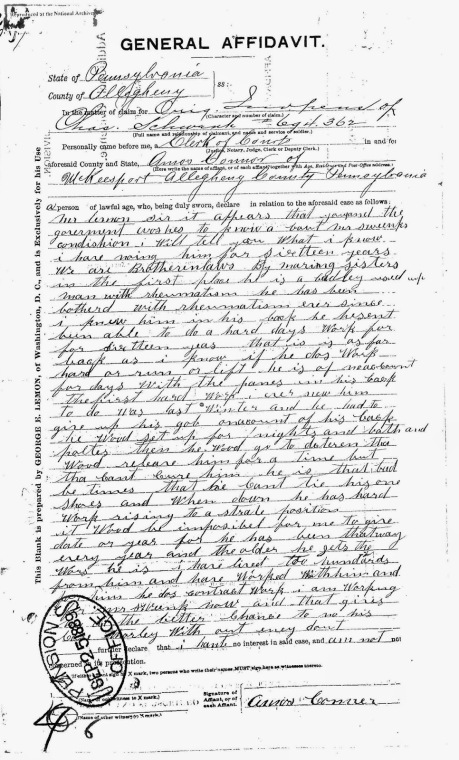 General Affidavit
State of Pennsylvania
County of Allegheny
In the matter of claim for Orig. ? of Chas. Schwank #694362

Personally came before me Clerk of Court in and for aforesaid County and State, Amos Conner of McKeesport Allegheny County Pennsylvania. a person of lawful age, who, being duly sworn, declare in relation to the aforesaid case as follows:

Mr lemon sir is appears that you and the government wishes to know a bout mr swenks condishion. i will tell you what i know – i have noing him for sixteen years. We are brotherinlaws By maring sisters in the first place he is a badley used up man with rheumatism he has been botherd with rheumatism ever since i know him in his back he hesent been able to do a hard days work for sixteen years  that is as far back as i know if he dos work hard or run or lift he is of [?] for days with the panes in his back the first hard work i ever new him to do was last winter and he had to give up his job on acount of his back  he wood set up for nights and bath and saltes then he wood go to [?] this wood releave him for a time but that\ cant cure him  he is that bad be times that he cant tie his own shoes and when down he has hard work rising to a strate position  it wood be imposibel for me to give date or year for he has been that way every year and the older he gets the wors he is  i have lived too hundreds from him and have worked with him and for him  he dos contract work i am working for mr swenk now and that gives me all the better chance to no his case thorley with out eney dout.

Further declare that i havnt no interest in said case, and am not concerned for its protection.
[Amos Conner]

This record is from the Civil War pension file of my second great-grandfather, Charles G. Schwenk.[1] Charles lived in Braddock, a steel town east of Pittsburgh, and filed a Declaration for Original Invalid Pension on 1 March 1889. His application stated that he had contracted rheumatism in his back from exposure, and that he incurred a “rupture” on his right site from wearing a cartridge box. This affidavit was submitted a few months later to support his case.

Charles was suffering from two chronic conditions. Rheumatism, inflammation and pain in the joints, was common in Civil War soldier, possibly caused by acute rheumatic fever.[2] His “rupture” was a hernia caused by wearing a cartridge box on his right side.

Amos Conner was Charles’ brother-in-law – his  wife Jane “Jennie” Burd was the sister of Charles’ wife Marian Burd. This particular affidavit was to be a statement of Charles’ current health struggles, as a result of his war injuries (there are other affidavits were about the injury itself).

“he is a badley used up man”

“had to give up his job on acount of his back”

“times that he cant tie his own shoes”

Amos’ statement gave a clear picture of how much the rheumatism had affected Charles’ life and ability to work. Charles was recorded as a “laborer” after the war, and Amos stated that Charles did “contract work” indicating that he did not have a steady job. It’s hard to imagine Charles, and the vast number of veterans, trying to work manual labor with the injuries sustained in battle.

Charles’s pension packet had similar affidavits from friends and neighbors. He received an “Invalid Pension” of $8 a month for his hernia, and nothing for the rheumatism.[3] A year later he requested an increase to $16 for the continued back pain—his rate was increased to $10 a month.[4] Charles had a wife and four children under 16.

Charles’ pension file, over 85 pages, contains valuable information about his service, his life and physical struggles after the war, and his family. I will post more of my finds from Charles’ pension records … records that tell about the life of Charles Schwenk, as well as the new information that I found in the packet.

Do you have any Union Civil War ancestors? Have you looked for any pension files to see what you might find?