A few years ago I shared some of the oldest pictures of couples that I have for Valentine’s Day. Here are some images of my Cubbage couples. Happy Valentine’s Day!

Minnie Cubbage and Harry Reabe, 1961, New Providence, NJ
(I don’t seem to have any others of Minnie and Harry) 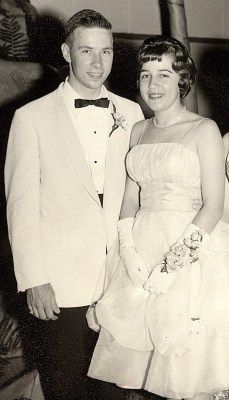 Frank Speck and Elizabeth Linneman, my great grandparents, were married on 18 January 1915 in Pittsburgh, Pennsylvania. I found this marriage certificate for Frank and “Lizzie Lineman” in a file of old family pictures and memorabilia.

Marriage records for this time are available at the Allegheny County Courthouse and I was able to get a copy of their application for a marriage license at the Orphans’ Court.[1] This record provides some details about Frank and Elizabeth:

The above information confirms much of what I know about Frank and Elizabeth, yet there are still come conflicting details. Elizabeth reported that her father’s name was Albert, yet all other records name him as Gerhard Linneman. It is unclear at this time if it was a nickname for him or an error (maybe Frank provided the information to the Clerk).

Elizabeth also reported that she as 22 years old, conflicting with the June 1897 birth date found in her German birth record.[2] This means that Elizabeth was actually 17 years old when she married Frank.

This marriage application also leaves a big question – how Frank and Elizabeth met each other if he lived in Monessen and she lived in Sprigg, which are about 300 miles apart! My current theory is that Frank knew her brother Christian. Around the time of their marriage, Frank worked as a bartender and a hotel clerk, and Christian also worked as a bartender, both in the Monessen/Greensburg area.[3]

The Orphans’ Court record also included the marriage return, which stated that Frank and Elizabeth were married at St. Peter’s Church in Pittsburgh, signed by the Rector, Edward H. Ward.

I looked up St. Peter’s, which was an Episcopal Church in the Oakland neighborhood of Pittsburgh. Sadly, this beautiful church was torn down in 1986.[4] Since neither Frank and Elizabeth lived in Pittsburgh, it’s not likely that they were church members, but it still may be worth it to see if the Episcopal diocese has a marriage record as well. 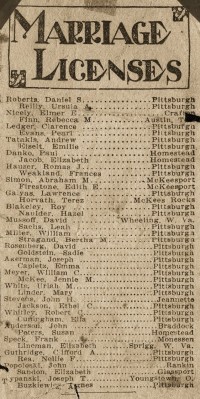 This newspaper clipping was also found in the family memorabilia and I was able to locate it in The Pittsburgh Post-Gazette edition from 19 January 1915.[5]

Frank and Elizabeth settled in Monessen after they married and my grandmother Agnes was born just over nine months later on 26 September 1915.

I have been thinking about William Burd lately. In an assignment for ProGen (peer study group) last month, William Burd was the key that unlocked a family for my second great-grandmother. I knew that my great-grandmother, Maine Swank Cubbage, was the daughter of Charles G. Schwenk/Swank and Marian Burd. Marian was born in Connecticut in 1854-5 and married Charles in 1871 in Allegheny County.[1] I had been unable to find any records for her prior to 1870.

This is where collateral relatives – siblings, cousins, nieces or nephews – can be helpful in opening some locked family doors. Census records for the Swank and Cubbage families included a William H. Burd. My grandfather mentioned that he shared a room with “Bill Burd” as a kid. Could William Burd be related to my second great-grandmother Marian Burd? Absolutely! (or this would be a very short and boring blog post!)

According to a birth register, William Burd born on 28 February 1894 in Natrona, Pennsylvania, although he consistently used 29 January 1894 as his birthdate.[2] I’ll come back to that date discrepancy shortly. By the time that Bill was six years old, he lived with his widowed Aunt Marian “Mary” (Burd) Swank, as an “adopted son” with her children, Maine and Charles.[3] For most of the next 30 years, Bill lived with Maine Swank, now married to Charles Cubbage, and their children.[4]

Charles and Maine had eight children, and Bill was about 10 years older than their oldest son, Lester. Over the years, Bill was recorded on various censuses as cousin, roomer and boarder. I found a photocopy of Bill’s school record and his photo (above) with some Cubbage memorabilia (I don’t know who had the original). Bill never married and spent most of his life with the Cubbage family in Swissvale and then Monessen. He lived with them when they lost two of their children (Leah in 1920 and George in 1921) and in Maine’s letter to her sister, she mentions how upset Bill was about George’s death, “Poor Bill is taking it awful hard. he don’t cry he just groans and that is worse.”

Bill died of influenza and pneumonia at the Cubbage home in Monessen in 1942.[5] Bill’s obituary lists the Cubbage family as his own, with no mention of his birth parents or other Burds.[6] Bill worked for many years as a foreman at the Blast Furnace at Pittsburgh Steel.

So how did he help me find my second great-grandmother’s family? For starters, “Burd” is often listed as “Bird” or “Byrd” and I was having problems determining which was our family and which was the correct spelling. In Bill’s death record, Lester Cubbage named Bill’s parents as Alexander Burd and Elizabeth Ryan. Obituaries helped me connect Alexander to his sister Marian Burd, and to four other siblings in Allegheny County. These siblings led me to confirm that their parents were Alexander Burd and Main Bingham. I’ll save them for another post.

So back to Bill Burd’s date of birth – the date that he used, 29 January 1894, was the date of his parent’s marriage, a month before the date of Bills’ birth in the county register.[7] I haven’t been able to locate much information about Alexander Burd and Lizzie Ryan. Alexander was widowed by 1900, but no death record has been located.

Much is still unknown about Bill Burd’s origin and parents, yet it appears that he was well taken care of by the Swank and Cubbage families. His presence in their families led me to his Burd family and opened the door to my third great grandparents, Alexander Burd and Main Bingham!

Have you ever used a collateral relative to help you find an ancestor? 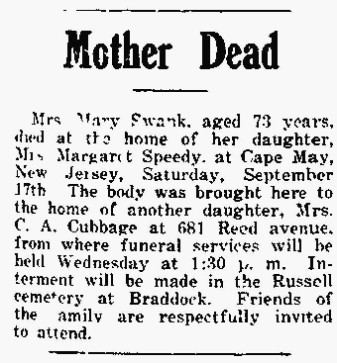 This article was on the front page of The Monessen Daily Independent on 20 September 1927.[1]  Mary Swank was my second great grandmother and had died three days earlier while visiting her daughter in Cape May, New Jersey. She was born in 1855 in Connecticut as Marian Burd, but also went by “Mary” and “Mary Ann”.

She married Charles Schwenk in 1871 and they had four children before Charles died in 1893. The surname Schwenk evolved over time to Schwank and finally to Swank. Mary has been a difficult person to research at times due to the variations of both her first and last names! As of now, I still cannot locate a death record for her in either New Jersey or Pennsylvania. It appears that her daughters did not file one after she died.

Mary was visiting her daughter Margaret Speedy, who was living in Cape May at the time. Margaret’s husband, William Arthur Speedy, had died at sea just over a year earlier. I can’t imagine how difficult it was for Margaret to be alone after losing both her husband and her mother in Cape May, while the rest of her family was in Pittsburgh and Monessen. Margaret eventually moved back to Monessen and lived with her sister Maine Cubbage and her family.

A death notice also appeared in The Pittsburgh Post-Gazette.[2] Marian “Mary Ann” Burd Schwenk was likely buried with or near her husband at Braddock Cemetery (also know as Russell Cemetery) in North Braddock, Pennsylvania. There is no tombstone for Mary but there are plots and headstones for her husband, sister, and other family members at Braddock.

I posted a few pictures of the Moms in our family tree. Sadly, I realized that I do not have nearly the same number of photos of the fathers in our tree. I’m not sure if the Dads were behind the camera, or there were more pictures of the mom and baby or children. So here are the few pictures that I have … and Happy Father’s Day to all the Proud Papas out there!