So much of our history is recorded, remembered, and influenced by the views our male ancestors. But that was only part of our story, and I am fascinated by the words of our female ancestors. I am adding a new blogging category called Women’s Words Wednesday where I will post and reflect on these important words that I have found in my research, in whatever form they arise (letter, photo, document or record).

Below is a letter from Sara Logan to Charles Cubbage, my great-grandfather, about Sarah Cubbage, Charles’ sister. [1] 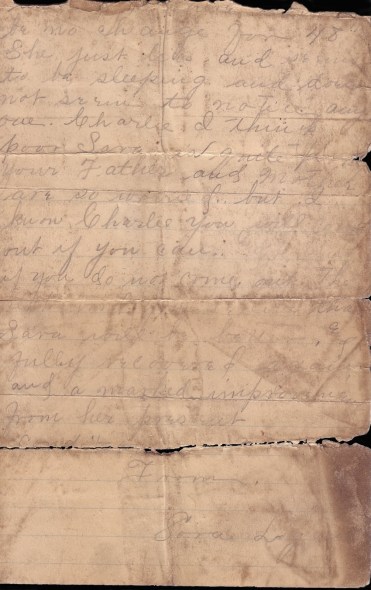 Mr. Charles Cubbage,
Dear Friend –
Will write you a few lines this morning in place of your parents to tell you that Sarah had fallen yesterday evening and got seriously hurt. It was so very icy, and she had gone to the shed to feed the chickens and was lying there when they found her. Her head pains her awfully and her back hurts her too. The Dr was here again this morning and said there was little improvement on her
[unreadable along frayed top edge of letter]
be no change for 48 [?]
She just lies and seems to be sleeping and does not seem to notice any one. Charlie I think poor Sara is quite [unreadable] your Father and Mother are so worried but I know Charlie you will come out if you can and if you do not come out the [unreadable, possibly “next word you” ??] that Sara will be better and fully recovered again and a marked improvement from her present condition.

Sadly, Sarah Cubbage died on Christmas Day, ten days after her fall. She was 45 years old. I do not know if Charles ever traveled the 30 miles from Swissvale to Penn Township in Butler County to visit his sister before she died. At this time in 1902, only Sarah and her brother James L. were still living at home with their parents – their five brothers, including Charles, had all left Butler County.

But who was Sara Logan? And why did she write the letter “in place” of Charles’ parents, James and Barbara Cubbage? Sara mentioned how worried they were and that her brother should “come out if you can”. Were James and Barbara too distraught to write the letter? These are questions I most likely won’t know the answers to, but get me thinking about the role that women played during a tragedy.

Sarah Cubbage, who never married, worked for many years as a servant in the home of John R. Logan. I am fairly certain that Sara Logan was connected to this family – either a relative of John, or possibly the spouse of one of John’s sons. Sara Logan wanted Charles to travel to see his sister, yet she seemed to stay positive at the end of the letter, hoping that Sarah will be “better and fully recovered.”  What was it like for her to be the bearer of bad news? Did she reach out on her own, or at the request of the parents? And since Sarah Cubbage didn’t survive, did Sara Logan need to write another letter to  Charles, and possibly the other brothers, to let them know about her passing? Or did Sarah’s parents James and Barbara send a letter?

Sarah’s obituary reported that “her death was made harder to those who loved her best by her continued promise of recovery”[2] making it appear that she was improving before she died. It also mentioned that she had for many years “remained in the home of Mr. John R. Logan, deceased, and where she was loved and will be mourned deeply” suggesting a close relationship with the Logan family. The obituary also notes that her brothers in Montana and Washington were unable to attend the funeral, leading me to believe that Charles made the trip from Swissvale to Penn Township.

Sara Logan’s letter to Charles, as well as Sarah Cubbage’s obituary, were found tucked inside of the Cubbage Family Bible, originally owned by her parents, James and Barbara.[3] I’m thankful for Sara’s words that convey part of Sarah’s story.

[2] “In Memoriam,” undated clipping from unidentified newspaper, citing death of Sarah Cubbage on 25 December 1902 in Penn Township, Pennsylvania; privately held by the author.