This post is part of Amy Johnson Crow’s “52 Ancestors in 52 Weeks” family history blogging challenge. The prompt for this week is “I’d Like to Meet.”

There are so many ancestors that I’d like to meet – too many to list here (and why). But one that stands out is Polly. She was my husband’s 5th great-grandmother. I’ve done a little bit of research on Polly and her family, but I have much so more to learn as I have not yet been able to get to Bedford County – it’s on my research travel list!

So what makes me want to meet Polly? Her Last Will and Testament. Here’s a quick timeline of her life to give you the basics before we get to her will:

On 21 July 1859, Polly wrote her own will. The will was signed with her mark, indicating that she could not write, and likely dictated it to someone. It starts as standard will:

Polly directed that all of her estate (real and personal) be sold by the executor. The resulting money was to be held by the executor as a trustee for equal use and benefit of her four children (which she named) during their lives and after their death to their children. If any daughters died without heirs, their share was to go to the surviving sisters (or the sisters’ children).

This is the part that caught my eye:

“… it being my wish that no part of the legacies herein given to my children shall be under the control of their present, or any future husbands they may have, or be in any manner liable for their debts.”

Wow. Nothing to the husbands, nor can they control the “legacies.” I have not seen anything like this in a will thus far! The following year, Polly was still living in Bedford County with her youngest daughter, and enumerated next to two other daughters and their husbands (and children).

Polly likely died in the early spring of 1864 – her will was proved in April. But not before Polly’s three sons-in-law “opposed the proof of the will.” But the court found it to be a valid will and that Polly “was of sound and disposing mind and memory and that she was under no undue influence.” The will was to be executed according to the law, and the court ordered that it was to be recorded as it was written. 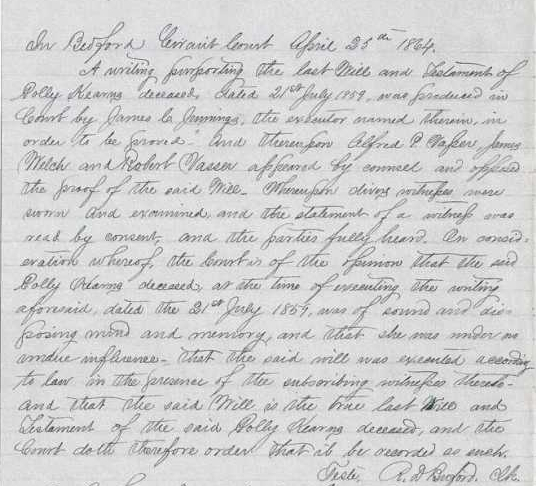 So they opposed the will! I wonder if these men knew about her stipulations, or if they learned it after Polly’s death? And why did Polly exclude them for having control of her estate? Did she know something about them? Did she feel that her daughters married poorly?

Back to the 1860 census … Polly’s real estate was valued at $1000, which was an average value compared to those who lived nearby. But the daughters who next next-door did not own any land, and their personal property was valued at much less than Polly’s. Were these sons-in-law just looking for her money? So many questions!

And what about Polly? This woman – at a time when women were just beginning to be allowed to own property (let alone control it without a guardian) – wrote a will that clearly didn’t permit her sons-in-law to control any of the estate that would go to her daughters. I wonder what lead her make this stipulation in her will. Was it the husbands, or did she want to give her daughters the ability to control their own assets?

Again, I have much more to learn about Polly, her daughters, and their husbands. She is definitely an ancestor that I’d love to meet one day. I’d have so many questions for her!

Have you found any interesting wills? Which ancestor would you like to meet?